A monumental bronze statue of Theodoros Kolokotronis on horseback (hero in the greek Independence War) dominates the park. It was created in 1894. A similar statue is found in Athens in front of the Old Parliament building.

The church for the patron saint of sailors was founded in 1836 and is of Italian influence. The wooden iconostasis, the pulpit, the chandelier and the large icons date from 1848-1849.

It owes its name to the five cannons that defended Nafplio in the west in combination with Bourtzi and was constructed by Venetians in the late 15th century.

An obelisk was erected in 1903 in the centre of the square in honor of the French Philhellenes (Maison, Fabvier and De Rigny) who fell during the Greek Independence war. Their names are found in the inscription on the base of the monument.

It dates from 1713 and allowed easy access from the Acronafplia castle to the town.

It is dedicated to the three Admirals (Codrington, De Rigny and Heiden) who devastated the Turkish-Egyptian fleet in the sea-battle of Navarone in 1826. In the centre of the square is the burial monument of Demetrius Ypsilantis, one of the leading figures in the Greek Independence war. On the west side of the square is the bronze statue of Otto von Wittelsbach, the first king of Greece.

The Church of Aghia Sophia in Nafplio.

Small domed chapel in the picturesque Psaromachalas neighborhood. It was probably built in Byzantine times. It was the only church within the walls in service from 1780 until the Liberation (1822).

Dating from late 18th-early 19th century it initially housed a Turkish school. The Prison of Palamidi was transferred here in 1926. Today it houses the restoration workshops and storage of the Archaeological Museum of Nafplio.

It was the most important road in the city in the 19th century. Along its sides there are still preserved houses from that period. 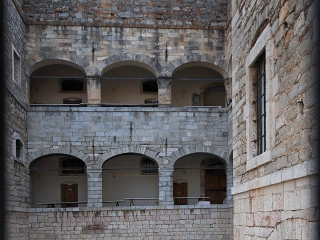 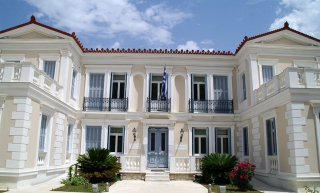